You're currently in buylist mode
Click here to exit 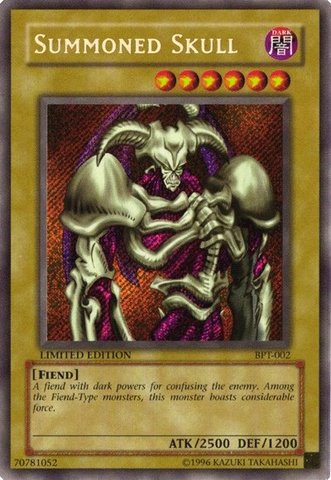 No description for this product.

Card Rules: Rulings powered by The Netrep API. [Re: Battle-Scarred] You can select an Archfiend that doesn't require you to pay Life Points as a target for 'Battle-Scarred' (such as 'Summoned Skull', 'Archfiend Soldier', or'Fiend Skull Dragon'). [Re: Bottomless Trap Hole] Only the monster(s) that triggered 'Bottomless Trap Hole' by being Normal / Flip / Special Summoned can be destroyed & removed from play by 'Bottomless Trap Hole's' effect. Example: Player A Normal Summons 'Dark Blade', and Player B activates 'Bottomless Trap Hole' in response (Chain Link 1), then Player A chains the effect of his face-up 'Ultimate Offering' to Tribute 'Dark Blade' for 'Summoned Skull' (Chain Link 2). 'Ultimate Offering's' effect resolves first, and 'Dark Blade' is Tributed for 'Summoned Skull'. Then the effect of 'Bottomless Trap Hole' disappears because the monster it would have applied to is no longer on the field. [Re: Level Conversion Lab] The Level change from 'Level Conversion Lab' lasts until the end of the turn, even if the monster is Summoned. So if you change 'Summoned Skull' to Level 3, and Summon it, it can attack even if 'Gravity Bind' is active. [Re: Ring of Destruction] If a player Tributes 'Witch of the Black Forest' for 'Summoned Skull', you can chain 'Ring of Destruction' to the effect of 'Witch of the Black Forest', in order to destroy 'Summoned Skull'. If this reduces the player's Life Points to zero, then they cannot use 'Witch of the Black Forest''s effect (to retrieve a 5th Exodia piece, for example). [Re: The Dark - Hex-Sealed Fusion] To use the second effect of this monster, you must Tribute this monster plus the legal Fusion Material Monster (s) written on the Fusion Monster. For example, to Special Summon 'B. Skull Dragon' you must Tribute 'The Dark - Hex-Sealed Fusion' as well as either 'Red-Eyes B. Dragon' or 'Summoned Skull'.
Passcode: 70781052
Set: 20022003 Collector's Tins
ATK/DEF: 2500/1200
Card Number: BPT-002
Card Text: A fiend with dark powers for confusing the enemy. Among the Fiend-Type monsters, this monster boasts considerable force.
Level: 6
Monster Type: Fiend
Rarity: Secret Rare
Card Type: Normal Monster
Attribute: Dark
Name: Summoned Skull
Edition: Limited
Pendulum Scale:

You're currently in buylist mode
Click here to exit